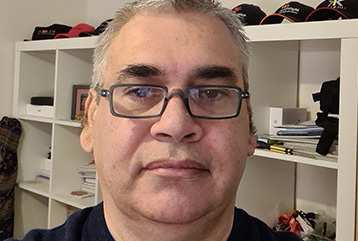 Robert Brittain is a Ballardong Noongar/Kija man whose heritage originates from his mother’s side of the family (Yarrans) from the Kellerberrin/Doodlakine area and his Grandmother who was from Ngarrawarnji country (Juwurriya or Moola Bulla Station) in the East Kimberley region. Robert was born and raised in the Perth metro area but has had the opportunity to live in numerous places including the Pilbara (Exmouth and Roebourne) the Midwest (Dongara) regions as well as Melbourne Victoria.

Robert is a recipient of an Indigenous Scholarship with Curtin’s Graduate School of Business and has gained a Graduate Business Qualification; Robert is currently working towards attaining his Master’s in Business Administration.

Robert’s career history initiated in the banking industry with Westpac Banking Corporation, he undertook several roles which ended as their Quality and Services Manager, Loans Processing. He then gained a role in the WA State Government within the Office of Aboriginal Economic Development. Since then he has worked in a number of roles including Manager Indigenous Participation (BIS Industries), Indigenous Affairs Coordinator (Civmec Construction and Engineering), Aboriginal Affairs Coordinator (BHP Billiton Nickel West) and was fortunate enough to work as the Manager Communities for BHP Billiton’s corporate office in Melbourne. Through these roles Robert has worked at a more strategic team level developing corporate strategies including Reconciliation Action Plans for both Civmec and BHP Billiton. Robert currently works for Many Rivers as one of their Community Economic Development Managers.

Robert has a passion for enabling Aboriginal people to have an ongoing opportunity of choice to ensuring they can achieve their own social, cultural and economic success. Michael Lynch is a Noongar man with connections to the Ravensthorpe region of South West WA (Wagyl Kaip & Southern Noongar).

As a Chartered Accountant and a Fellow of the Governance Institute of Australia, Michael is committed to developing financial transparency and making a contribution towards building financial capability in his community.

Michael is currently employed as a Senior Accountant with Woodside Energy and is also Treasurer of Clontarf Aboriginal College in Waterford, WA. Mr Malcolm Williams was born in Katanning and is a member of the South West Boojarah and Wagyl Kaip & Southern Noongar Native Title Claim groups.

His parents Mr Garry Williams was born at the United Aborigines Mission in Gnowangerup and Mrs Wendy Williams (nee Colbung) was born at the Mt Barker Aboriginal Reserve.  Malcolms’ paternal grandparents on his father’s side, were Mr Len Williams and Mrs Elsie Williams (nee Hayward).  Malcolms’ maternal grandparents on his mother’s side were Mr Tim Colbung from Mount Barker and Mrs Ethel Colbung (nee Krakouer) from Cranbrook.

Malcolm completed Year 12 before undertaking employment as a public servant in the education, training and employment sectors for nearly 34 years.  His specific strengths include Krista Dunstan (nee McMeeken) is a Nyoongar woman from Esperance (Wagyl Kaip Southern Noongar) who was Miss NAIDOC Perth 2011 and admitted to legal practice in 2012. Krista is currently a Principal Policy Officer with the Department of Planning, Lands and Heritage developing policy for divestment of the Aboriginal Lands Trust estate and other lands based Strategic Projects. Krista is committed to community development and equity of service through a number of roles including as a member of the board of Celebrate WA, Richmond Wellbeing, the Western Australia Aboriginal Cricket Advisory Committee and as an officer in the Royal Australian Air Force Reserves. Krista was a recipient of the Human Rights Commission's Young People's Medal in 2012, a finalist in both the Young Business Women's Award and Corporate and Private Award categories of the Telstra Business Women's Awards in 2015, the Law Society's Lawyer of the Year (under 5 years' experience) in 2017 and the Women Lawyer's WA Junior Woman Lawyer of the Year (joint) 2018. Krista is excited to be a member of the Noongar Charitable Trust Advisory Committee as it gives her the opportunity to give back to Noongar people in a meaningful and positive way.